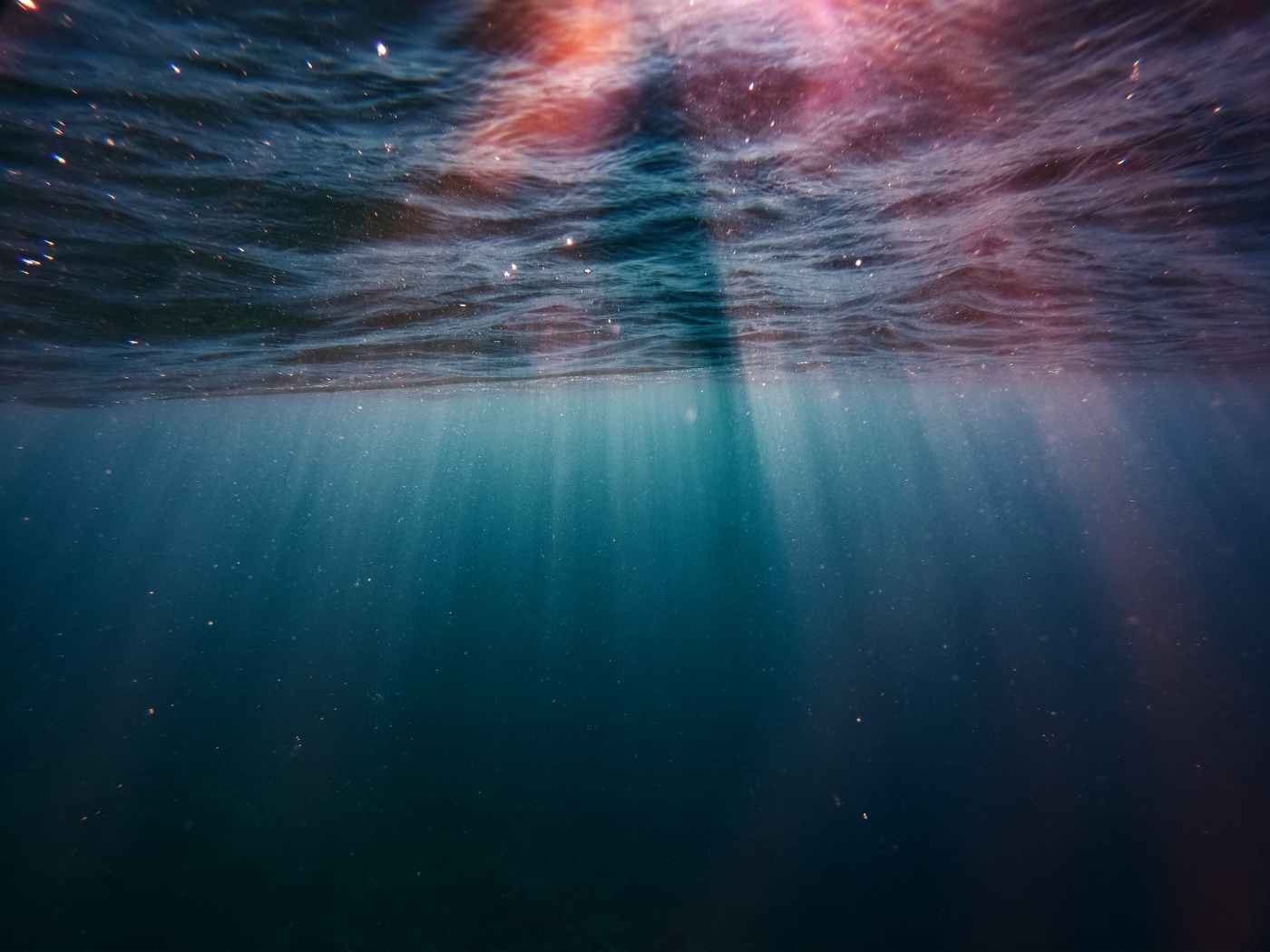 The time has never passed by so fast like it did for me while studying MACE. I have mixed emotions while reflecting on my journey for this module. In the beginning of the year Janja had informed us that we will be working on a live project brief individually and we will need to deliver according to industry standards. We had started this module by discussing all the briefs that were available for us to choose from the D&AD competition. We also were supposed to work on our personal development plans to see how we wanted to achieve certain goals in near future. During this time, we were also learning about project management using agile methodology.

As I have been running my fashion label in India, I usually work for individual clients wedding which needs to be delivered in a specific timeframe. I thought that it would be an easy task for me to handle a project brief and deliver it on the specific deadline. When we were asked to pick a brief, I was reading through all of them but was unable to choose one as I didn’t feel any of the briefs were something which was related to my field of fashion. But then I chose John Lewis & Partners because it was closest to my profession and I could later add it to my portfolio.

I was pretty confident in the start, that I could handle this brief well as it wanted me to help John Lewis & Partners own ‘thoughtful gifting’. The brief expected me to create an animation/ illustration led campaign for the age group of mid 20’s to mid 30’s which John Lewis brand considers time-short urbanites. The campaign should also work across all digital touch points and later be translated to physical objects. I knew I had to begin with knowing about the brand and their services for which I chose to take ethnographic approach. This helped me understand the different services they provided in the store like personal styling, home décor, beauty experiences and many more. As we were learning about different research methods in class for our dissertation I wanted to practically learn and practice them in the brief so that I could use the knowledge gained during my dissertation. Being a fashion designer, my brain had already started coming up with ideas and all I could think was how to connect young adults with the gifting experiences. For my second stage, I realized I wanted to know what people considered as a gift? Do they know about the services and experiences John Lewis & Partners are providing? To get the answers to all these questions I created a questionnaire and sent it to family and friends. Figure 2: Results from the questionnaire used for research.

I received a lot of responses to which I was quite happy but during my critique in the class I understood that as I didn’t know many people in London, I approached my family and friends in India to answer my questionnaire. I understood that I could not consider this research credible as some of them had never even heard of the brand.

I just kept thinking of the end deliverable so I came up with the idea which revolved around Mother’s Day and how mothers should be given a day off from their responsibilities. To showcase my idea, I used references which were taken in a wrong way as it showed women in stereotypical image. In their article, reclaim your creative confidence, Kelly T., Kelly D., (2012) talk about how people should be able to let go of ideas that aren’t working and be able to accept ideas from other people. Till this time, I had started becoming restless and frustrated as nothing was going in the right direction, but I knew I couldn’t give up and I had to work towards achieving the end goal.

As we were having critiques every week, we were able to see everybody’s progress and get inspired by their way of working. Time was running by and I was really amazed by how few of my classmates were very organised with their research and thought process. I was then told by Janja that I should re-visit the brief and begin again. Even though it was frustrating, and time was short I researched more and started again from the start. This time I did a lot of research and gained key insights. According to John Lewis retail report (2018), people changed the way they live which was reflecting in their shopping trends. People now were using smartphone a lot more than other channels. Search filters were being used a lot more which indicated that now people know exactly what they are looking for and are spending mindfully. Another key inspiration was the national treasures campaign by Paul Thurlby which helped me understand that for a campaign to be successful it needs to connect with customers. Like the national treasures campaign became successful because it depicted the British lifestyles and traits and people could relate to it. 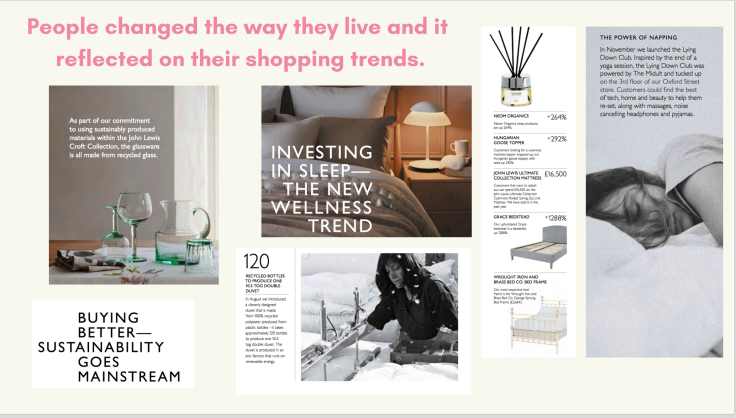 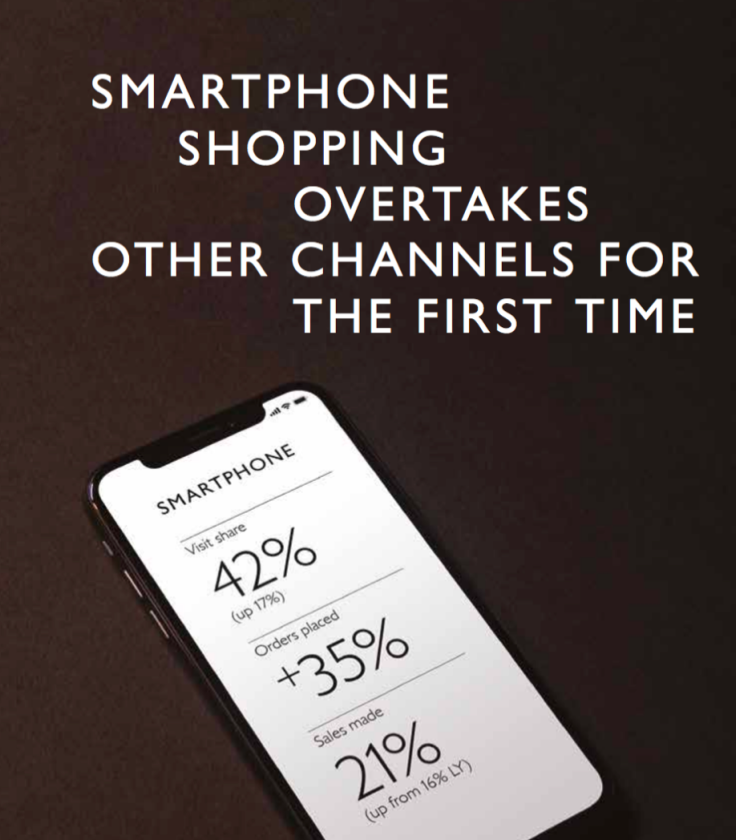 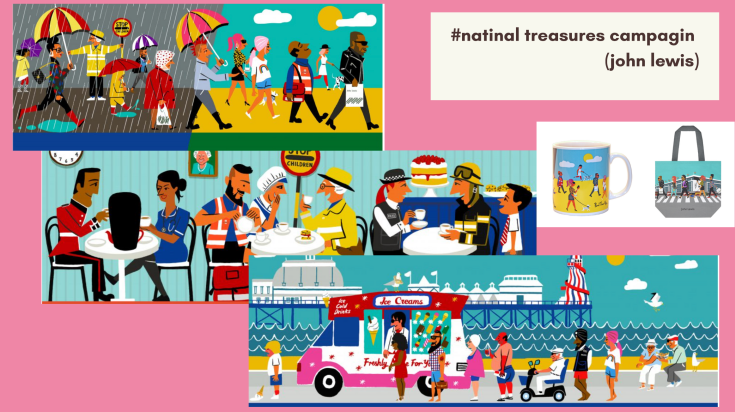 Based on my research, I understood that I wanted to create a campaign which would celebrate all the small moments throughout the year which need special attention like a baby announcement, Mother’s Day or just the first day at job. Using my drawing skills, I illustrated all these moments keeping in mind the brand style and ethos. Because I had been thinking of making a 2-minute video I ended up doing the same using the concept and my hand drawn illustrations. DA&D submission was just a day after, and it was time for us to showcase our end deliverables to the class. I was really happy until I heard Janja telling me that it doesn’t match the brand guidelines and the video was not using the hand sketched illustrations well. I was extremely disappointed that I wouldn’t be able to submit for the DA&D competition, but I still wanted to unpuzzle the brief and make sure I understood the deliverables. According to Agile PM User Guide (2016) communication helps in building the final product better. Using the new brand guidelines, I designed Jpegs to show how the campaign would work across the digital touchpoints and be used for packaging and bags. Finally, I had unpuzzled the brief and created what was required out of me.

Last three months have been a roller coaster ride for me which was filled with different emotions. But I learnt a lot about project management and agile methodology and finally I could connect the dots. I learnt that while handling a project the business deliverables need to be put first and the result should revolve around it. My biggest learning through this module was that it is very important to do the research and understand the brand before coming up with the ideas. I learnt it the hard way, but I didn’t realize then, that all my mistakes were leading me to the final outcome. Being a creative I love to let my mind wander, but I learnt that it’s very important to have a balance between the creativity and time management. Weekly critiques really helped as it was a good way to share our progress and get inspired by people’s work. Communicating your thought process to different individuals is a good practice as sometimes they can help you see what you have been missing all along.

I had been working on Agile Pm for many weeks but when I started working on the sessions, I could relate it to my brief and understand how I could have managed it better. Agile Pm made me understand that it’s very important to keep the client’s part of the progress as it can help us not go in the wrong direction and also deliver to certain expectations and requirements. Another learning on this module was how to make a professional CV and Cover letter which helped me a lot as I was trying to find a job in UK for my placement year. This helped me get few interviews and helped me in getting the placement as well.

In our last class Janja left us with the last slide saying ‘DO SOMETHING GREAT’ which is exactly what I will be aiming for. This module has helped me understand a lot about my own self and handling projects which is going to be really helpful for me to apply to my fashion business.